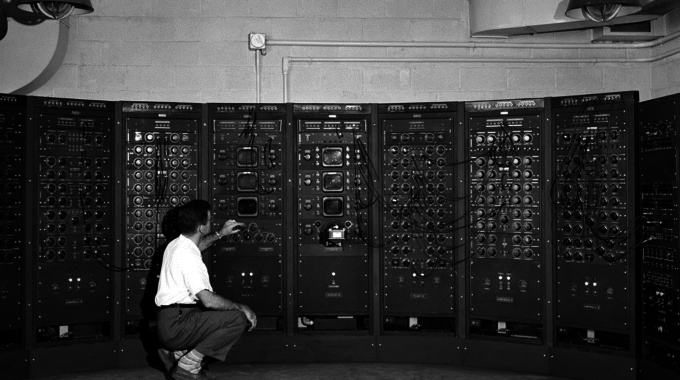 As early as the 1940’s there was a call for technology in the legal sector. Shortly after, this led to the development of a science called “Jurimetrics”. A field of study that had the purpose of applying the scientific method to the legal field. This was later followed in the 60’s by the foundation of a magazine called “modern uses of logic in law”.

Marvin Minsky was the first to see two applications of digital aid; documentation and consultation. We can still recognize this separation in the present day. Legal firms broadly adopted documentation systems in the 70’s. Consultation relies more on artificial intelligence and is, therefore, not yet developed to such an extent that it is usable. Although the first steps are been taken with IBM’s Watson.

In the 80’s and 90’s not much progress was made in the field of computational law. After 2000, however, we have seen an exponential growth in development. So much so, that the established law firms have started taking into account these developments in their projections of the future.

Current state of technology in the legal sector

Legal tech is popular among startups at this time. Stanford University is indexing a growing list of companies. These emerging companies engage in a broad spectrum of topics. Think of Document Automation, Analytics, Legal Research, Education and Decision Trees.

It’s funny, when Leibniz was first thinking about computation at the end of the 1600s, the thing he wanted to do was to build a machine that would effectively answer legal questions. It was too early then. But now we’re almost ready, I think, for computational law.

Governments also see the importance of combining legislation and digitization. The Leibniz Center for Law in Amsterdam has developed METAlex. A digital standard for referring to laws and legislation that is adopted by the United Kingdom and the Netherlands. In the United States, an executive order issued by President Barack Obama in May 2013 mandated that all public government documentation be released in a machine readable format by default, although no specific format was mentioned.

Aforementioned, a large majority of law firms have adopted digital document management systems. Slowly but surely they’re all starting to move these systems into the cloud as we speak. Applications to create, send and archive documents is also common. Customer- and case management, invoicing and general ledger software is used by practically everyone. However, these are all tools to increase the internal efficiency of companies.

Where are we heading?

The next change will be towards the clients and customers. They are the ones demanding new, more and better services. This is where the next big chance is going to happen. For example; giving clients access to their own files through a login on the firm’s websites. Self-service and transparency are the keywords. Chatbots that help you fight parking tickets are a real thing, and they’re very successful!

Disruptive technology does not necessarily have to come from the startups. Rocket Lawyer from the US (funded by Google) is coming to Europe and will start offering their services in France, Spain, and the Netherlands before the end of 2016. After that, they will rapidly expand to the rest of Europe.

To go along with current trends, law firms will have to start offering parts of their service for free. This change is hard to sell to the partners in the larger offices. It will directly impact the pockets of the smaller businesses. The ones not engaged in this turnaround yet will soon be overtaken left and right by the competition. Either way, it will most likely hurt!

Recently, a successful serial entrepreneur and investor said to me; “legal tech is hot”. I couldn’t agree more, there is a visible stream of investments and a lot of interest in the development of technology in the legal industry. Large…

Over 20 people have been working on it – many designs evaluated – ideas born – ideas trashed … Now it appears that the new version of dStyle 365 is available soon. Your Office in the Microsoft Cloud The urgent…

The Why, How and What of GDPR, Document Creation, and your DMS